Two Seven Corners Adventure Team Members, Kim Harvey and Patricia Riley, took some valuable time off to go medieval in Pennsylvania At Pennsic War hosted by the SCA (short for The Society for Creative Anachronism).

As long-time members of the SCA, we spent a few days in a remote part of Pennsylvania doing medieval reenactment activities with over 10,400 of our closest friends.

The SCA has been around for more than 50 years. We are a not-for-profit educationally-based reenactment group. During the evolution of our game, we have created longstanding get-togethers, known as Wars. Pennsic War is one of the oldest and longest of these events held in the United States, having been around for 47 years.

The two of us, along with the other 10,000 SCA members, help the small town of Slippery Rock, Pa. get on the map. For two weeks Slippery Rock becomes the third-largest city in the area.

During our yearly pilgrimage to the Cooper’s Lake Campground, just outside Moraine State Park, people from all over the world gather to reenact medieval life from 600 – 1600 AD. Due to the size of the event, a mayor and deputy mayor run the activities—and we work with U.S. Homeland Security to insure we have enough evacuation and emergency management plans in place. We are truly a pop-up town!

Attendees share in the medieval lifestyle, including activities such as: sword fighting, bardic activities, cooking, camping, rapier, archery, thrown weapons and general skills classes at what we call Pennsic University. Pennsic Univeristy is held daily for the two week period of time. Made up of over 200 classes taught by experts in their field on anything and everything medieval, participants can attend and learn different facets of medieval life.

Many of us spend most of our time at Cooper’s Lake Camp Ground just camping (many of without power), recreating battles, food and fun. If you were to walk all the roads at Pennsic War it is more than seven miles long.

Over the years, our group has evolved to include children’s activities of all kinds.  The children can participate in youth sword fighting, archery, thrown weapons, and classes just like their parents!

Although it can sometimes it can be a challenge living without electricity and the modern comforts of home, it is honestly fun to see how creative our members can be. Creating your own portable shower house is the newest craze. I honestly think we were the original glampers!

If you are interested in learning more about SCA, visit SCA.org. You can find your “kingdom” as we have groups all over the world. 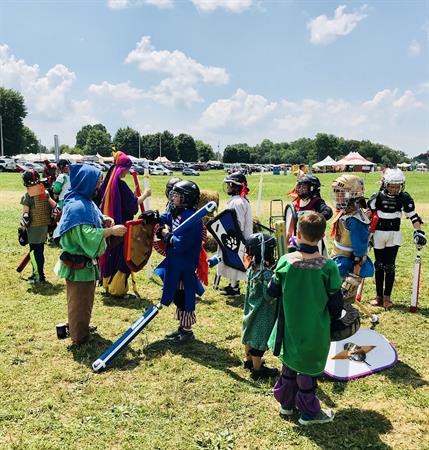