Annette Gobrogge, director of People and Culture at Seven Corners went on a cruise with her daughter and her daughter’s best friend to explore the Caribbean. Here’s her story.


My daughter was turning 30 this year and to celebrate we decided to go on a cruise. We one on the Carnival Sunshine for May 13 –18 because this was also the weekend of Mother’s Day!  My daughter’s best friend also joined us. We booked it months in advance and were very excited for the time to come.

We each flew into Orlando on Saturday morning and drove to Coco Beach, where we stayed in a hotel on the water. On Saturday we explored Kennedy Space Center and then enjoyed a walk on the beach, and then went to dinner at the amazing Taco Shack.

Sunday morning, we got up and went for another walk on the beach, then rode on our shuttle headed to our cruise ship! We got on board and found our beautiful balcony room, all decorated for my daughter’s birthday! We really enjoyed the Carnival Sunshine.

Monday was a sea day, which we thoroughly enjoyed!  We relaxed by the pool, played games, ate a lot and then went to the evening comedy club and laughed so much!  It was also formal night, so we had a great time getting dressed up for the evening.  We had dinner reservations for the steak house — which was amazing — and then we danced the night away in the atrium.

Tuesday morning, we arrived into the port of Amber Cove, Dominican Republic. Beyond Amber Cove is Puerto Plata, a town that began life as the first European settlement in the Americas. Its founder? Oh, just a guy named Christopher Columbus. The three of us decided to go on a city tour excursion that included riding on scooters called “Trikkes” and then ending at a beautiful oceanfront resort for lunch. However, we ended up with a slight detour because I crashed on my scooter.

After riding around on the scooters for about 30 minutes, I found myself on the ground with my daughter and the tour guide right there.  I was wearing a helmet, knee pads and elbow pads but I braced my fall with my left arm. My arm was really hurting. The tour guide called for the van to come and get me and they brought me back to the resort. I was able to get a bag of ice and waited for the group to return. It was about 4 hours from the time I fell until the time I was back on the ship, and I went immediately to medical. They did x-rays and said I fractured my radial head. The Dr. on board ship wanted to put a cast on my arm, but I was very hesitant about that. I just asked for a sling.

Did you know:The most common cause of a radial head fracture is falling with an outstretched arm.

I figured out very quickly how NOT to move my arm!  I also broke my left arm and I am left handed, so it was quite the learning experience trying to figure out how to do things with my non-dominant  arm.  My daughter and I tried to make the best of it though.  The best part of this experience was having my daughter there to take care of me and help me every step of the way.

The other good thing I did was purchase travel medical from Seven Corners for all three of us before we left for vacation. I felt so good knowing that had I needed to go to the hospital while in the Dominican Republic, that I was would have been well taken care of.

Wednesday we arrived at Grand Turk and  had a beach day excursion planned. It was very relaxing and beautiful. 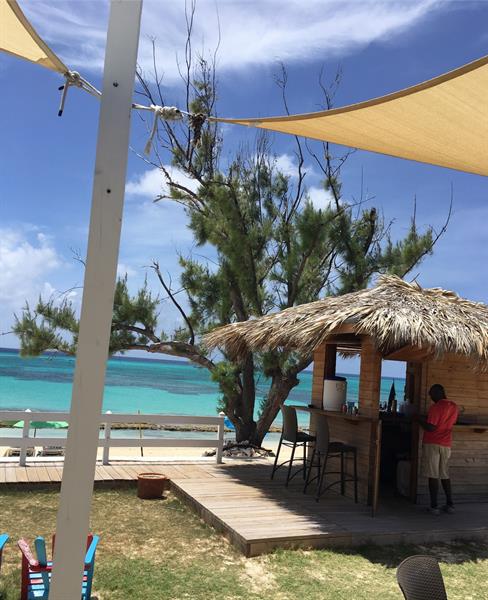 On Friday when we got off the ship we had originally planned to spend the day at the beach again in Cocoa Beach, but my arm was still really hurting, so we called Southwest and they got me onto an earlier flight home. The next morning I went to an ortho walk-in clinic with my good friend Amy by my side and they took more x-rays, splited my arm and informed me that fracture was so large that it will require surgery. I had the surgery on May 29 and pretty much spent the entire summer not being very active so my arm could heal properly. I did all my physical therapy and I’m happy to say that my left arm is back to functioning at about 99%!  This was a big reminder to me and my family to NEVER travel outside of the US without travel medical insurance! Thanks Seven Corners!