The moon is nearing full as it rises past the tombstones and trees overhead. It’s 4 AM. There is a golden glow and warm energy lifting up into the cold of night. A woman wrapped in a blanket smiles at me as she throws another branch on the fire next to her shining alter of orange marigolds, flickering candles, a local bottle of mescal and freshly baked bread. I drowsily nod back contently. Hmm, I’ve never been so curiously comfortable sleeping in a Mexican cemetery.

I’m still buzzing from experiencing Dia De Los Muertos in Pátzcuaro and the traditional cemeteries near the ruins of Tzintzuntzan. If Day Of The Dead is the world’s most notorious celebration of death, the epicenter of that experience is within the colonial areas surrounding Lake Pátzcuaro in Michoacán, Mexico. It’s near impossible this time to find a hostel bed or hotel room… but who needs one when you can sleep in the grand luxury of a graveyard?

The peak of the week-long celebration is the 36-hour period that leads through the night of November 1st – known internationally as All Saints’ Day or All Hallows’ Day. Of course the festivities also rouses the expected madness of a messy Mexican street party, but the backbone (I have to throw a skeleton reference in somewhere) of the gatherings summon and hold truly powerful moments. Friends and families spend the week before preparing plans and decorations for the graves of loved ones passed. People then gather to stay up all night to celebrate and honor the life in death.

A skeleton hides between a human mask that is used culturally in Michoacán’s ‘La Danza de los Viejitos’ (The Dance of the Little Old Men). The dance starts quiet with the ‘old men’ moving achingly slowly and hunched over, then when the tempo kicks up they dance exuberantly, stomping their feet to finally end coughing and falling over their canes.

It is believed that the spirits of the dead visit the living during these revelries and are guided to their alters through the vibrant colors and scents. This is why the marigold - or cempasúchitl as it’s known in the local Aztec Nahuatl language – is particularly prominent. Their bright scent and orange color is known to represent the sun, which in Aztec mythology, guides the spirits on their way to the underworld. 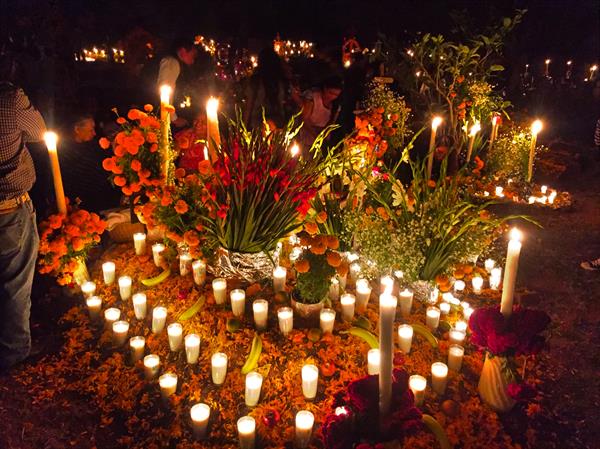 Elaborate decorations created to celebrate and welcome the spirits of the dead back to their loved ones.

The extending ruins of Tzintzuntzan at daybreak overlook the town of the same name. It was the ceremonial center of the Purépecha Empire, which withheld numerous attacks by the neighboring Aztec Empire. The Purépecha’s finally surrendered to the Spanish, not wanting to suffer the same destruction to the visitors as the Aztec’s The ruins are open extended hours to the public during Dia de los Muertos.

If it sounds like a sad and solemn event, it isn’t. Yes, there are people that are mourning and praying while they reflect and shed their emotional burdens…but this is still Mexico: a fiesta is only one tequila shot and trumpet blast away. Between the tombstones are kids playing, food sharing, picture taking, mescal passing and mariachi singing – pretty much everything a westerner was taught to believe that shouldn’t exist in a cemetery. Yet, why not?

With all the happenings throughout the streets, parks and tombstones, one word keeps resonating in my head: openness. During this traditional Mexican event, the national unspoken adherence to everyone’s space being open to one another is especially evident. Mi casa, tu casa… Mi graveyard, tu graveyard... There’s never a feeling of being uninvited or overstepping boundaries. You want to take a photo, eat or pray with my family at our alter? Bienvinidos. Come join us. Try my grandfather’s favourite tequila. The spirit of being open extends throughout daily life in Mexico and carries on through death – when the spirits are still invited to join the fiesta. 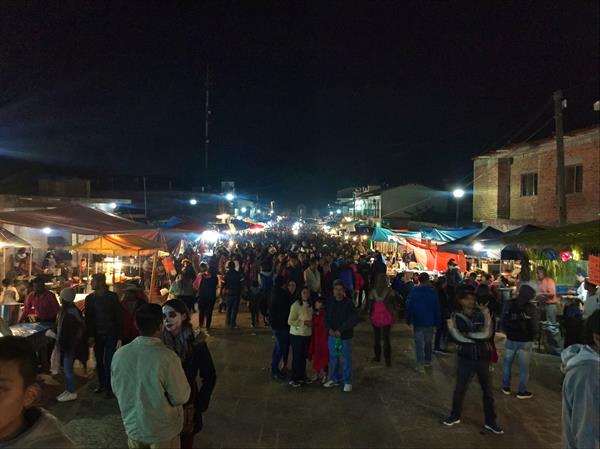 If only western culture could also celebrate death like we do life. We should commemorate it with bright color, favourite food, live music and laughter instead of grey sadness, hushed mourning and a suppression of beautiful moments shared and lived. Our lives deserve a celebrated equality of both birthday and deathday. You can’t fear the reaper when it’s invited to the party.

Keep the doors open to the spirit of celebration – whichever side of life that spirit resides.