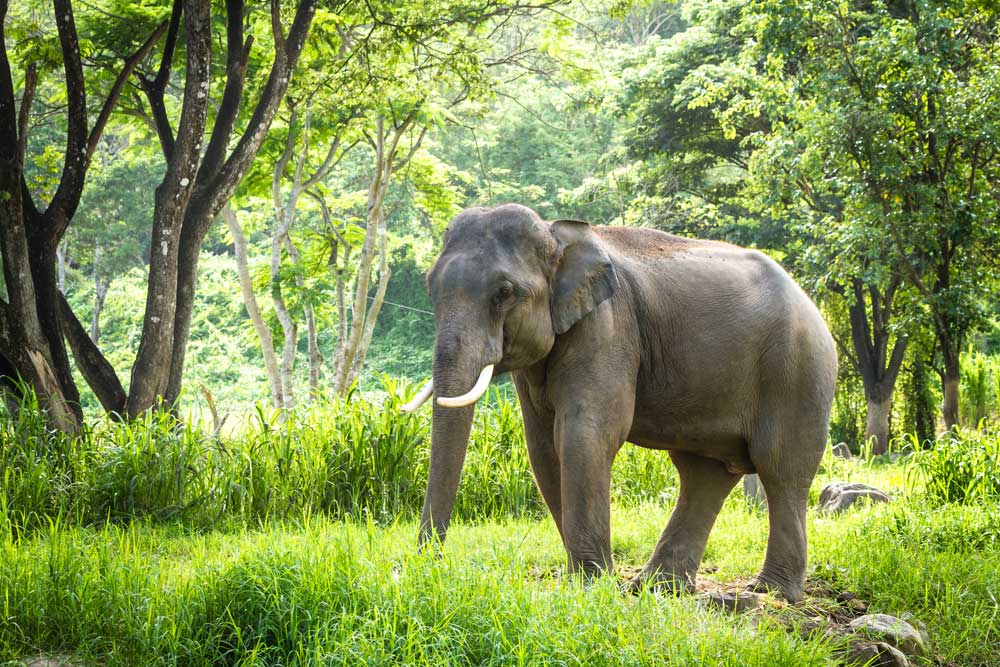 "Don't ride the elephants," said a few passionate people I met in Asia shortly before I rode an elephant. Because of the stigma attached to riding Asian elephants, I didn't want to ride the elephant I rode. I rode the elephant for the same reason I put a lobster in a toilet of my high school—peer pressure—my Filipino host had graciously invited and paid for my ride.

The Relationship Status of Humans and Elephants in Asia is: It's Complicated.

Elephants are an official national symbol of Thailand. For thousands of years, elephants have participated in warfare, labor, royal and spiritual symbolism, and most recently, tourism. Cultural status in Thai culture is important and complicated. In the last century, the elephant has fallen from high status to the low status of tourist commodity. This is related to there being few protections afforded them by society.

Elephant tourism is an ethical issue for both humans and animals. Miskept and mistreated Elephants in Thailand can become depressed, anxious, and ultimately could become aggressive. The victim of the aggression is often the elephant's "mahout" or handler—once a prestigious job, now a low wage, low class job assigned to immigrants.

There are two types of elephant owners, traditional owners that have owned elephants for generations and "nouveau riche" owners who have taken on owning elephants for the first time. A UN human rights report on the issue notes that, "nouveau riche owners nearly always spell trouble for elephants because inexperience owners invariably lack the expertise needed to supervise the hired mahouts."

Elephant Voices, an elephant rights organization, describes elephants as complex social animals with close family ties and differing gender roles — a lot like us humans in other words. And if someone were to keep me in a cage with psychologically oppressive conditions? I might get depressed, anxious, and ultimately aggressive too.

Elephant Tourism: A Right or a Wrong?

Voices cautioning against participating in elephant tourism in Thailand come from two places: a place of caution or activism.

Elephants can be dangerous. They are huge beasts capable of complex emotions. Biologists have noted even in the wild, elephants go through mood swings. A properly trained handler knows when an elephant is in bad space and should not go out to work. That was the underlying error that led to an elephant handler’s death in Thailand that reached the international media because of the chaotic situation surrounding it. The handlers suggested the elephant take the day off, but was overruled by the owner.

Most of the elephants in question come from gene pools that have been domesticated for thousands of years. Saying all elephants in Asia should be free is as extreme a viewpoint as wanting all horses in the United States to be set loose.

Visiting an Elephant Village in Thailand

After my elephant ride with the Filipinos, we rode our bikes to the elephant sanctuary and got the lowdown from the front lines of the Asian elephant problem.

"Are we allowed to be here?” I asked my friends as we rode our bikes into a field of elephants walking next to the few humans headed towards a few buildings

"I don't know," said Drexel, a Bangkok resident from the Philippines, "I guess we'll find out."

We set our bikes on a tree and a baby elephant came running towards us—surely we were stealing many little kids dreams in that moment. We became like kids—it's a baby elephant and he wants to hang out with us! Then the lil baby elephant started untying my shoe, and we all filled up our memory cards taking photos.

After we recovered from baby elephant delight, we walked to a cafeteria area where everyone was wearing the same red volunteer shirt. We ended up chatting with Matthew Ward, a British 20 something who was a volunteer-gone-employee at Elephant Stay, a nonprofit dedicated to retiring old elephants after the tumultuous life of change elephants in Thailand have undergone in the last few decades.

What properly done elephant tourism does for elephants in Thailand is give elephants a job and a sanctuary. In 1989, when the Thai government banned elephants from being used as animal labor in logging, every elephant found itself suddenly without work. Many elephants were set free and ran amuck, causing chaos in cities across the country.

In 1996,  a Thai couple gave an elephant to their 7-year-old daughter as a birthday gift (which makes all of the childhood gifts we received seem epically lame). Through the elephant owning process, the family learned just how bad elephants in Thailand had it. So they started the Prakocha Baan Foundation (ElephantStay in English) a working village for elephants that today houses 160 animals. The foundation takes in dangerous and killer elephants and reintroduces them back in the social hierarchy of elephant society. Their funding comes from offering tourists elephant rides and packages where visitors can stay in the elephant village and learn how to maintain and train elephants.

"People come here because they love elephants and want to protect them," Ward says.

He is one such elephant lover. He came upon the elephant village on a trip to Thailand and stayed for one week as an elephant caretaker. His first week he was taught how to care for Honey the elephant.

"During that week,” Ward recounts, “I was completely captivated by these animals, the village, the work that goes on here and specifically fell head over heels in love with my Honey! It was love before first sight."

Then he went back to England and returned to volunteer for six months. When six months was up he became an employee and has been at the elephant village for the past three years.

The other volunteers I spoke with found their experience on an elephant stay as both educational and transformational.

"Elephants are smart!" One young woman from Australia exclaimed, "not just smart, but intelligent and wise. They are also affectionate.”

I remember from a safari in Kenya my guide saying, "If a man mistreats an elephant, the beast will always become upset when he sees that man again. Forty years can pass, but the elephant will remember.”

My run-ins with elephants over the years cause me to conclude they are on my level. Like maybe a dozen animals on earth—whales, dolphins, gorillas, and, apes—elephants seem like kind creatures worth helping escape the plight of misery that modernity has imposed on some of them.

How to Know If You're Helping an Elephant?

So you want to ride an elephant, how do you know if your ride is helping the elephant or if it is promoting human and animal rights abuse?

One good way is to Google wherever you are going and find out if there is an elephant sanctuary nearby like
ElephantStay in Ayutthaya, Thailand.

Another good way is to find some passionate human rights worker and ask him or her. Peace Corp and NGO workers tend to know what's going on in and around town.

Insurance Tip: If you want to be open to doing epic things like elephant rides, always add a dangerous sports waiver to your insurance plan.