The decision to visit Topsail Island, North Carolina arose from the desire to avoid crowds.

My husband and I were planning a trip for our anniversary. We knew we wanted to visit a beach, so I started thinking of Myrtle Beach, South Carolina. After some discussion, we decided to search up the coast a little for a beach that would potentially be less frequented by large families and party people. This is how we found Topsail Island. Without the usual tourist traps, we hoped this location would be less crowded than the more widely known Myrtle Beach.

The 26-mile island didn’t have much to offer other than clean beaches and sparkling ocean. This was perfect for us; we wanted nothing more than to sit on the sand and wade in the water. After a little research, I discovered a little bed-and-breakfast in Hampstead, North Carolina where we would be the only guests. Our plan was to have no plan. We would head to Hampstead and see where our vacation would take us. 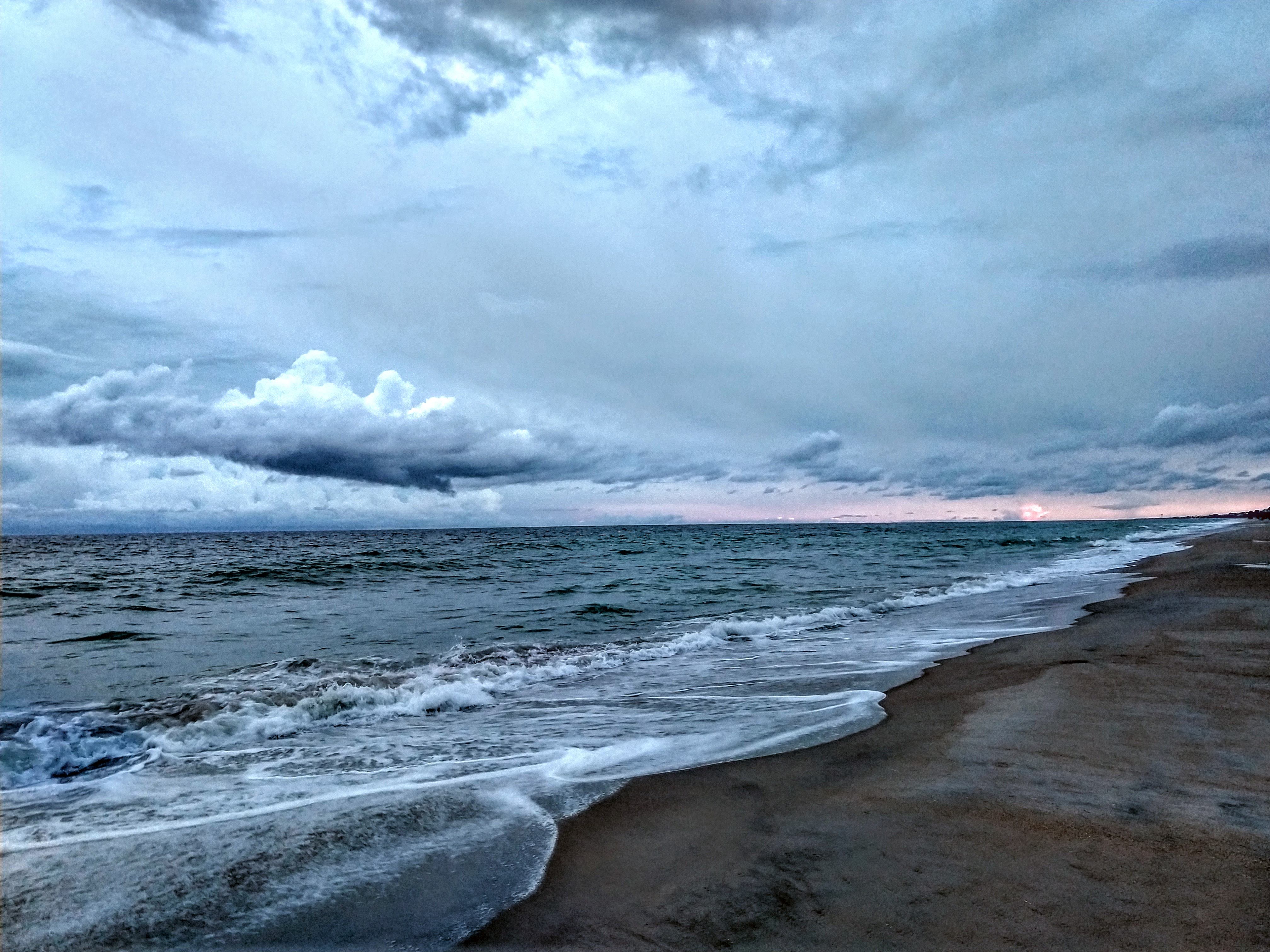 The bed-and-breakfast was a sweet little house on stilts, tucked about 10 minutes outside of town by the bay. Phoebe Hood is the owner and operator of this B&B and has been for the past 15 years. This was the first time either my husband or I had stayed at a bed-and-breakfast. We were a little nervous, but any fear we had of awkwardness over being the only guests at the B&B dissolved because Phoebe was just that good. Phoebe is a welcoming, accommodating, and generous host. We enjoyed talking with her over breakfast every morning and truly felt at home.

Aside from a tasty, homemade breakfast every morning, Phoebe offered several other amenities. Below the home, there is a small sitting area with a hot tub, hammock, and beautiful view of the dock on the bay. There is also a storage room filled with anything one might need at the beach — umbrellas, chairs, boogie boards, etc. — all available to use at no extra cost. We sat on the deck one clear night to watch the stars. I enjoyed reading in the sunroom that overlooked the bay.

In the guest bedroom, Phoebe keeps a folder with printed pages she has typed with fun day-outings and directions to some of her favorite places. Phoebe has thought of just about everything to make her guests’ visits to the area as easy and comfortable as possible. She even added a sweet, special touch for my husband and me; an anniversary card was placed on our dresser the day of our anniversary which fell on the third day of our stay.

I can’t recommend this bed-and-breakfast enough. The home and location is beautiful and Phoebe is the perfect host. Honestly, all other bed-and-breakfasts may be ruined for me as the B&B at Mallard Bay has set the bar incredibly high. 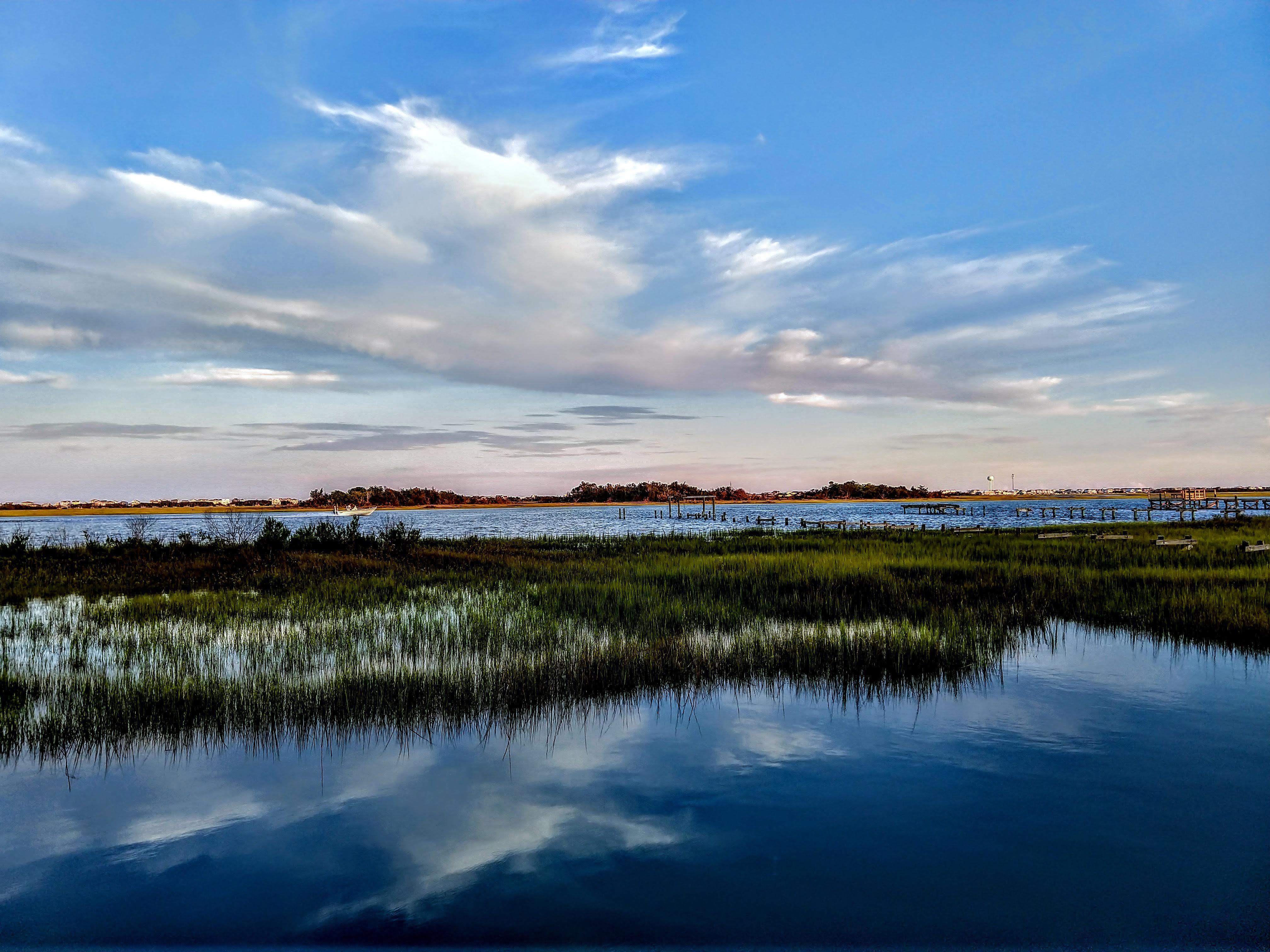 The first breakfast we had with Phoebe, my husband asked if she recommended the turtle rescue. Her reply was, “I work there, yes, I recommend it.” Phoebe and other volunteers of the Topsail Turtle Project work to preserve the endangered sea turtles. They watch over nests in the late evening hours during which baby turtles are most likely to hatch. The volunteers build ramps in the sand down to the shoreline to help the baby sea turtles scoot to the ocean. “If you’re walking on the beach this evening, maybe I’ll see you,” Phoebe told us. Later that evening, I sent Phoebe a text asking her where she was. She replied, letting me know that the next nest over had just hatched and that they would release them when the sun went down. We made it just in time to see the tiny turtles set loose in the sand. Watching all 130 hatchlings make it safely to the ocean was an inspiring example of the ways the Topsail Turtle Project is preserving the sea turtle population. The volunteers that staff the turtle hospital rehabilitate sea turtles that have been injured by boats, cold-stunned, or suffering from any other ailment. They stressed that they would never turn away a patient. By rescuing and returning these turtles to the ocean, they increase the chance of the species’ survivalWhen visiting the turtle hospital, spectators enter a room filled with tanks. Each tank is labeled with the name of the patient. Interns stand among the tanks and explain to guests the medical history of different turtles. The center only charges $5 for a regular priced admission ticket. The Karen Beasley Sea Turtle Rescue & Rehabilitation Centeris a great and inexpensive experience. 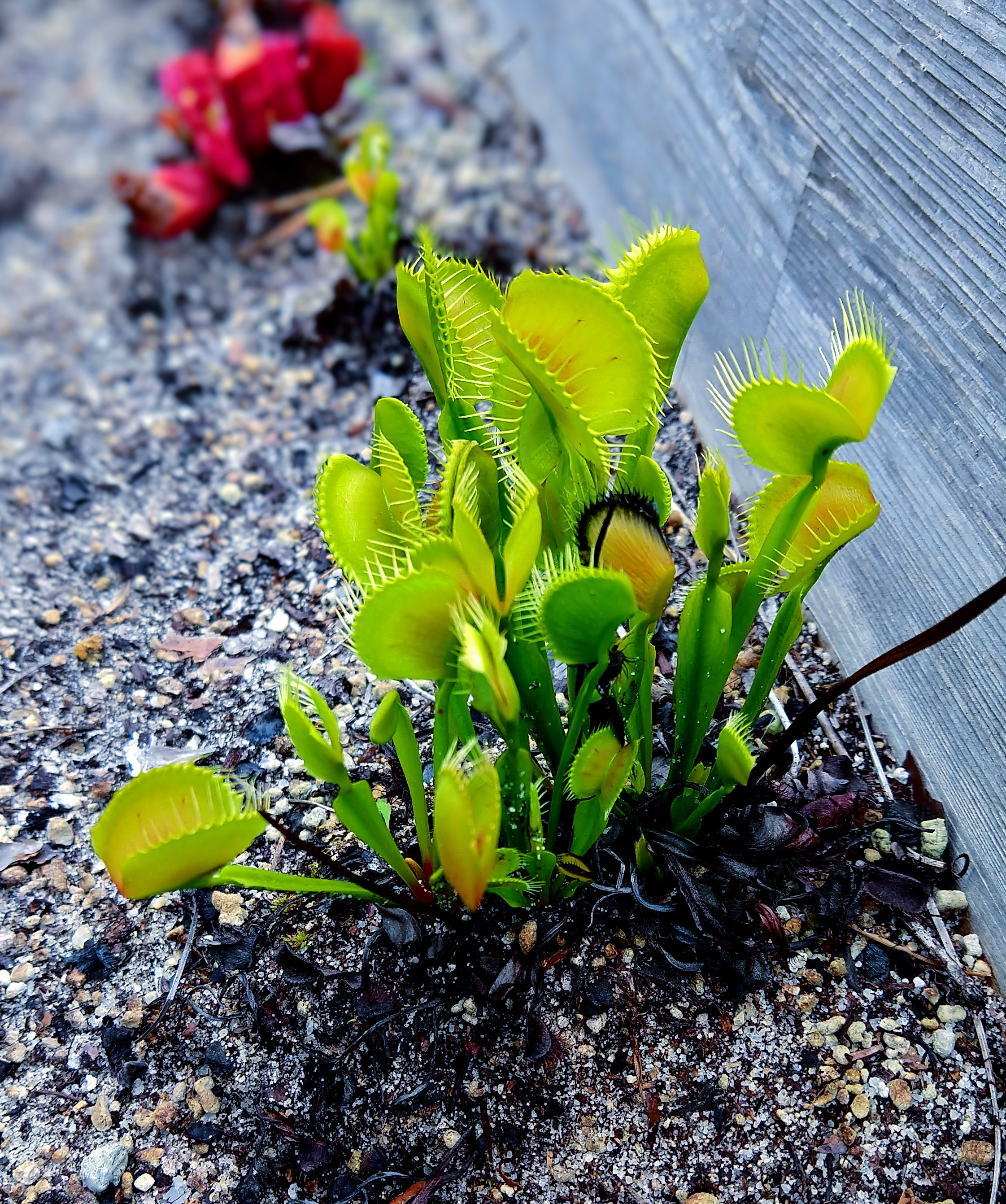 Venus flytraps are native only to a 75-mile radius around Wilmington, North Carolina. Unfortunately, many of the wild native plants have been poached. To battle this poaching problem, Stanley Rehder propagated and preserved the carnivorous plants for around 25 years. Thus, the Stanley Rehder Carnivorous Plant Garden has become a sanctuary to North Carolina’s venus fly trap population. Rehder had an affinity for carnivorous plants in general, so the garden is also home to pitcher plants and sundews. My husband and I made the 30-minute drive to Wilmington from Hampstead to witness the plants firsthand. Neither of us had ever seen these plants in nature. Unfortunately, our trip was during the offseason for the plants; many of them appeared to be dying on our visit, but Phoebe let us know that they flourish in the late spring and early summer. 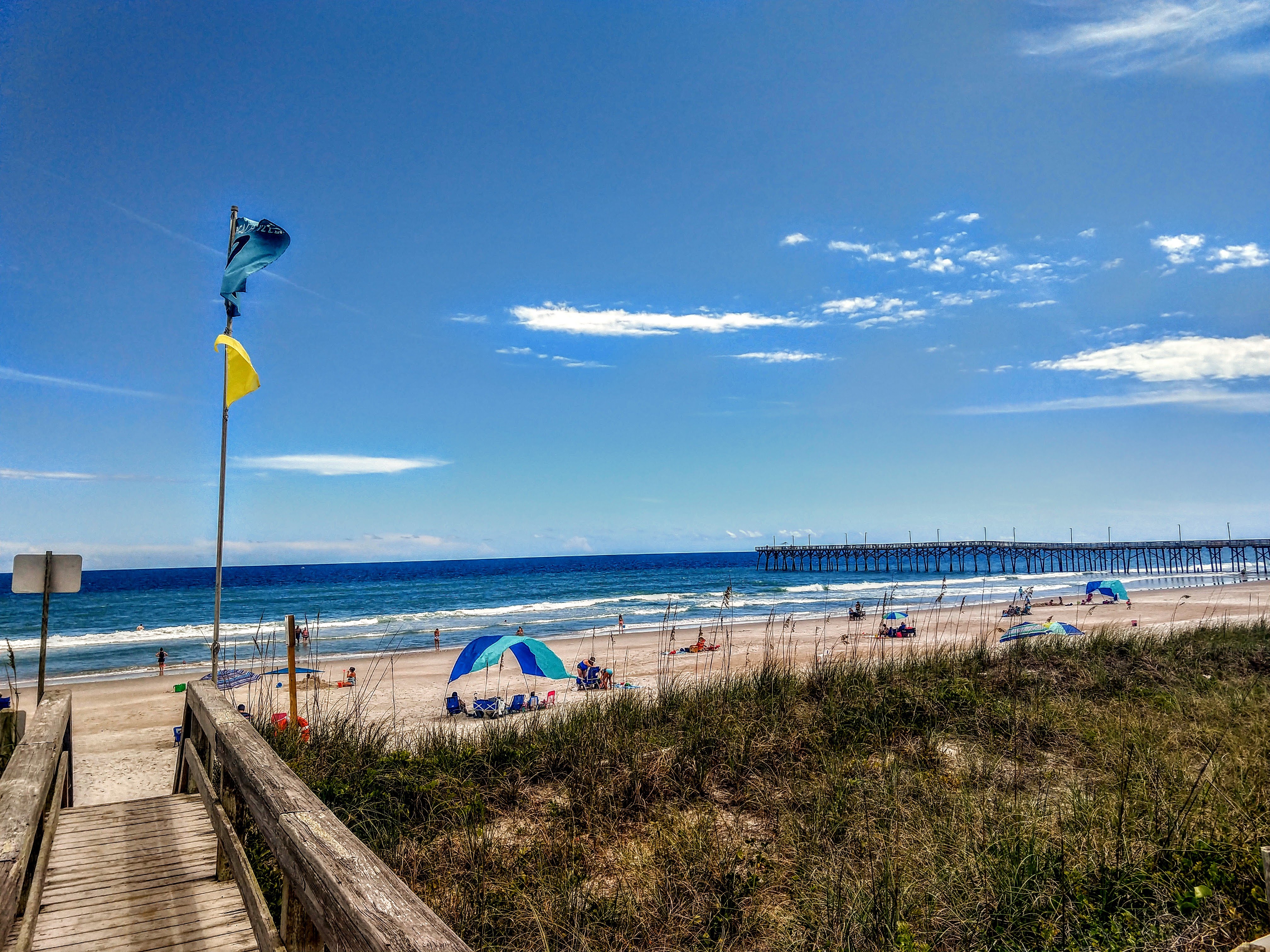 Topsail Island is a 26-mile-long island just off the coast of North Carolina that is divided into three sections — North Topsail Beach, Surf City, and Topsail Beach. There isn’t much to do on Topsail other than sitting on the beach (which is perfect if you want a truly relaxing vacation).  There are the usual piers to fish from, ice cream shops, and lunch spots found in beach towns. My husband and I discovered The Fractured Prune, a donut shop that fries your donuts fresh and lets you customize the toppings. We also visited a taco stand called Shaka Taco at Phoebe’s recommendation. The taco stand uses fresh ingredients from local farms and fishermen. Just as we had hoped, the beaches were not overcrowded. The sand was clean of any trash. The water was clear of floating debris. Our closest neighbors were far enough that we felt we had our own private location. If you’re like me, sometimes a vacation doesn’t feel like a vacation when you are concerning yourself with sightseeing and filling every moment with activities. This is where my desire for a vacation full of nothing but sand, sun, and waves was born. So, for me, this was the perfect vacation because we did nothing but sit on the beach for days with a few beautiful moments of turtles and carnivorous plants sprinkled throughout. My husband and I had no plan, and it was glorious. At times I didn’t even know or care what time it was, this is a luxury I don’t get during a routine week. Next time you need a vacation from reality and restrictions, take a trip to Topsail Island, North Carolina.

Jessalyn has always loved writing and visiting new places. A few of her other favorite things include hanging out with her cats, watching true crime documentaries, and playing roller derby.