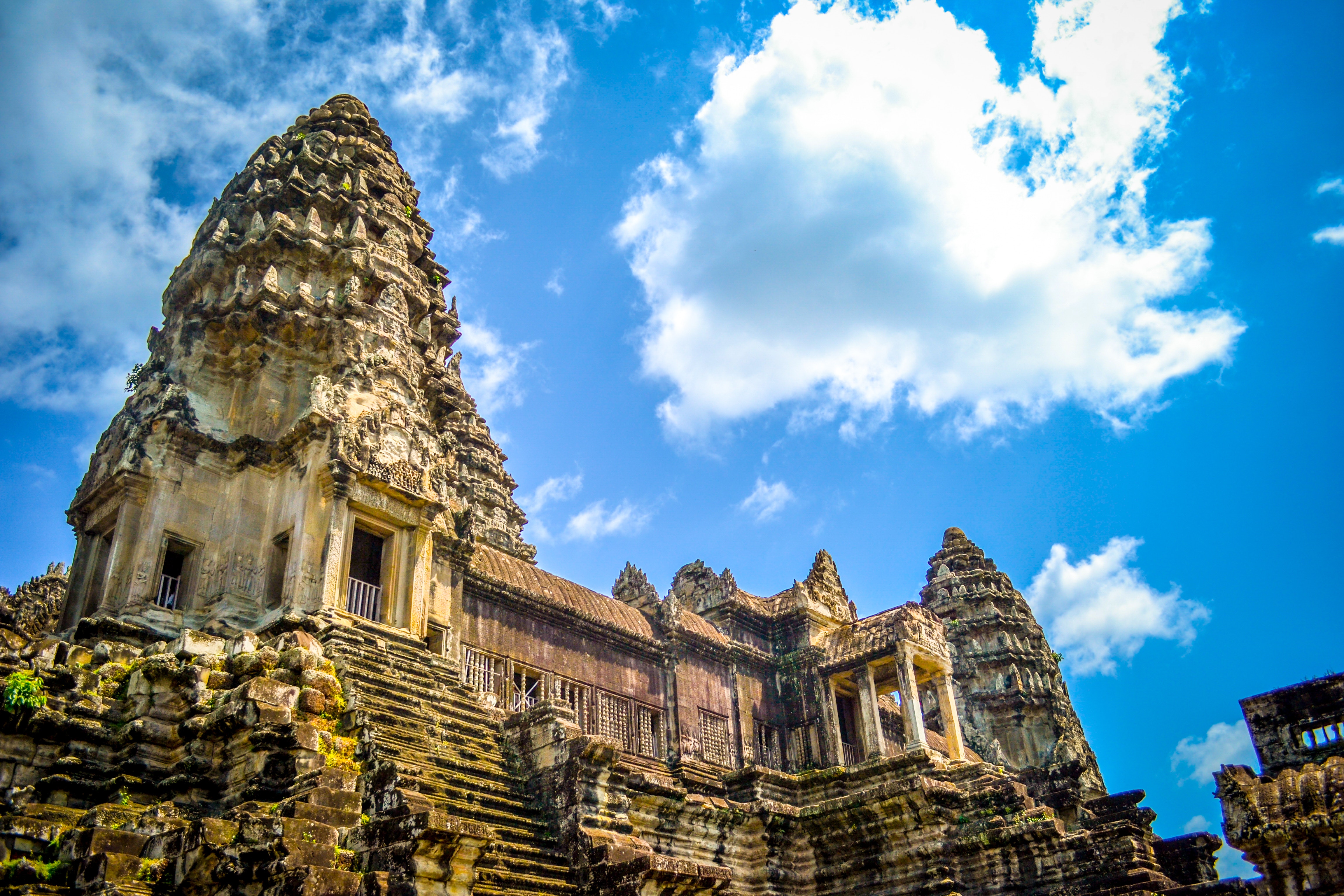 Angkor Wat is one of the world's more popular tourist destinations on Earth and every year droves of travelers come from all over the world to miss the experience of a lifetime by not being fully present in one of the most full-on wonders of the civilized world.

The temple complexes of Angkor Wat, Cambodia make up the largest religious monument in the world. When construction began in the 12th Century, it was designated as a Hindu temple, which gradually became Buddhist as the religious culture shifted. In the 16th Century, the first Western visitors arrived and one Portuguese monk described Angkor Wat as having an "extraordinary construction that is not possible to describe with a pen, particularly since it is like no other building in the world."

Beginning in the early 2000s, when digital photography replaced the need to conserve film, the camera zombies arrived. These visitors spent more time looking through a screen as they did experiencing the splendor. In 2014, modernity armed the zombie armies with selfie sticks. Social media has never been the same and most tourists get over 100 likes per selfie.

I will cover what I found to be the best way to visit Angkor Wat. This advice is relevant for all of the wonders of the civilized and natural world.

Full disclosure: I sometimes selfie with best of the compulsively snapping zombie army. But during a sixth month stint in Asia this year, Angkor Wat caught me at a particularly mindful time after a month-long meditation and yoga retreat. Implementing the mindfulness lessons learned there allowed me to get a much fuller experience out of my visit that can pave the way for you to get the most out of your trip to Angkor Wat and beyond.

Before We Visit Angkor Wat, Let's Talk About "Seen It All Syndrome"

Frequent travelers sometimes fall into a jade colored hole and contract SIAS, or Seen It All Syndrome. We think that because we've seen the pyramids of Egypt that maybe we don't need to visit the Mayan pyramids of Tikal. Or just because we've seen a dozen castles in England there is little reason to kiss the Blarney Stone in Ireland.

If you start to feel this way, you might have SIAS. If you suspect this could be you, please go directly to the nearest mirror (when in doubt head to the restroom) look at yourself and tell yourself, "I am not going to become one of those jaded travelers whose cynicism trumps would-be inspiring moments!"

If You're In Cambodia, You HAVE to Visit Angkor Wat

During my time in Cambodia, I visited Angkor Wat because I felt like I had to. Eight years prior, I had opted to miss Macchu Picchu in Peru in order to eat Guinea pigs with locals and Lima, and I've never heard the end of it: "You were in Peru for a month and you DIDN'T go to Macchu Picchu?!" That was also the year I was held up at the Panamanian border for not having the yellow fever vaccination, and the year I was kicked out of a club in Nicaragua for bringing a table on the dance floor, so it was not exactly a year of the best choices.

In hindsight, I cannot believe that I was lukewarm about visiting Angkor Wat. Clearly, I had been on the road too long and suffering from SIAS. Angkor Wat ended up being more of a moving experience than I imagined it could have been. The way I visited likely contributed to that being so.

How To Visit Angkor Wat

There are as many ideas out there of "how to visit Angkor Wat" as there are temples to visit--hundreds upon hundreds. You could spend a lifetime exploring the temples of Angkor Wat, as some archeologists have. For the lay tourist, there are three choices, small, medium, or large--A day pass, a three day pass, or a weeklong pass.

How many days should you visit Angkor Wat? Guidebooks on this topic disagree as much as your fellow travelers. One Canadian I talked to said, "There's really no reason to get more than a one day pass. Once you've seen a few of the temples, you've seen them all."

This was much different than the Swiss traveler I talked to in an hot air balloon where we were getting a 10-minute aerial view for a twenty bucks (I highly recommend). He was on his fifth trip to Cambodia to see Angkor Wat and still opted for a weeklong pass. I asked him why he kept coming back and he glanced at me with a look of aged wisdom explaining accumulated secrets to whimsical youth, "It's Angkor Wat, it's the greatest wonder on earth!"

For your first day in Angkor Wat, I recommend that you leave your camera at the hotel. As sacrilegious as it sounds, this is exactly what I did and what I saw was temples and zombies. As kids of modernity, we can nary see a kitten doing something cute before our craving forces our hand into our pocket to pullout our smart phone so we can snap a photo. Being in Angkor Wat is like a million adorable kitties and the impulse to capture every inch on camera is unavoidable.

There will be time on day two and day three to take photos. On day one, just be present. I’ll reiterate what the Swiss guy said, “It’s Angkor Wat!” On day one, I brought neither a camera nor a map. I just got lost, walking from the main temple to the secondary temples nearby. I walked slowly. I breathed deeply. I just took it all in. I felt connected to the millennia of history I walked upon and through.

Everyone else seemed in as much of a hurry as I likely did on day two and three. I met few who did not have a camera in hand with their fingers hovering above the shutter. To each their own, sure. But there are some experiences that are minimized in proportion to the amount of photos we feel the need to take.

There is a time and place for everything, and Day Two is a great day to revisit the main temple complex that you started off from the day before, this time armed with your camera, map, and (if you must) your selfie stick.

This way you will be able to focus on taking a good photo instead of focusing on taking in Angkor Wat for the first time while trying to take a photo of it–which to me feels the same as that feeling of last minute Christmas shopping at the mall (which could just as easily be dubbed a mini-panic attack).

For my third and final day in Angkor Wat, I rented a bicycle from my hotel for the staggeringly cheap price of $1/day and I cruised around seeing as much as I could see. Since this was my last day, I took plenty of stops to snap photos. I did not have a selfie stick, but found that with a bit of duct tape (always bring duct tape everywhere), a branch, and the self timer on my iPhone, a DIY selfie stick is available wherever trees grow.

While the climate is hot and humid in Angkor Wat, the terrain is flat and easily navigated by bicycle. Just remember to bring enough water to stay hydrated. While there are places to buy water near the main temple, on some routes you could go for miles without being able to top up, so plan well and always bring more water than you think you need.

If you do not want to work up a sweat, you should be able to rent a tuk-tuk for $20/day. After two days on foot, this is the more relaxing option. Your hotel should be able to arrange for you a tuk-tuk. The other option is to bargain for one in the streets of Siem Reap. Expect to have to haggle with a gaggle of aggressive, but agreeable drivers. For those who want a driver/guide who is knowledgeable about the history of Angkor Wat, I recommend arranging a driver or guided tour through one of the countless travel agencies dotting the streets of Siem Reap.

This is by no means the only way to play Angkor Wat, but it's a solid one that gives this magnificent cause for pause its due. Visiting Angkor Wat appears on many a bucket list. There is a lot to see, but there is also a lot of levels of experience and history in every scene that you'll miss out on if you don't spend some time slowly taking it all in.