5 Epic Motorcycle Trips from Around the World 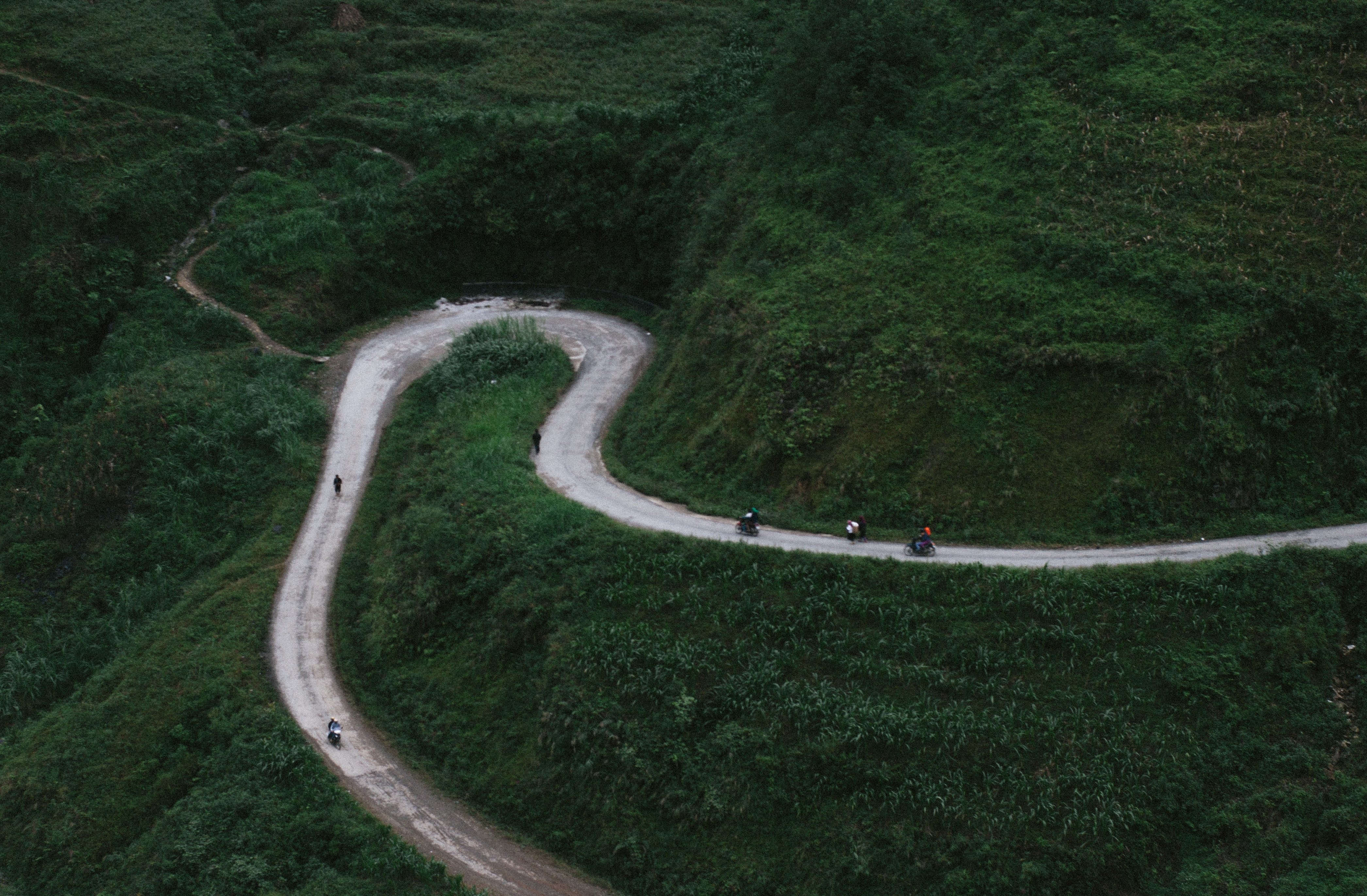 Deeply rooted in many adventurous minds is a rustic image of an empty road with a single motorcycle cruising through it on the trip of a lifetime.

When I bought my first motorcycle in Guatemala, people said things like, "Luke, that's not a motorcycle, it's a scooter you nerd!"

I replied with, "Shut up, it's a 100ccs of pure beast, and me and my semi-automatic Honda hog are going to cruise through the countrysides unfettered by the windshields that imprison all of you!"

Travel is travel —it takes us to new horizons and awakens us to the world. But motorcycle trips — traveling across a corner of the world by bike — this is what happens when travel meets Mr. Epic and asks Mrs. Amazing for a dance on The Dance Floor of Glory!

If you ever get the chance, if you have the urge, if deep inside your intrepid soul is that image of a waiting road for you to bike across, then here are five of the most epic motorcycle trips you can embark upon. And if you don't have a bike, don't worry, you'll pick one up when you get there.

Before you even think of going, be sure to add hazardous activities coverage to your travel insurance plan. I think traveling without this type of coverage is crazy to begin with. Embarking on a motorcycle trip without it is just insane — the cost is minimal, but the protection it gives guards like a mother goose. Take a look at the Seven Corners Travel Medical plans to learn about hazardous activities coverage. And if you don't know what I mean, spend some time on YouTube looking up people getting attacked by a mother goose (but first read this article, you'll be on YouTube for hours).

Let's quickly define our terms. While a quick Google search affirms that the terms motorbike and motorcycle are interchangeable, in this article I use motorcycle to describe anything that might involve you knowing how to use a clutch and motorbike for smaller automatic bikes.

Today's Vietnam tops many a Southeast Asia traveler's favorite list. When it comes to economic travel, it's a country of outrageously delicious meals for $1 and private rooms starting at $7.50. When it comes to motorbike trips, Vietnam is an easy country to land in and hit the ground rolling.

Starting at $250, you can purchase a roadworthy motorbike from just about anywhere. Bikes in Vietnam are like beards in Brooklyn — ubiquitous. New arrivals buy used bikes from the soon-to-depart and this cycle continues ad infinitum. If you have 12 days to burn on a bike, you can travel all the way from Hanoi in the north to Ho Chi Minh city in the south or vice versus.

You're in for some epic scenery along the way as you drive through quiet country roads bordered by verdant rice paddies being tended to by Vietnam farmers in their internationally iconic cone shaped hats.

Keep in mind, neither your home country's nor an international driver's license is valid in Vietnam. But so long as you have a valid license at home, you can register for a driving permit in Vietnam in 7 days. (But don't base a trip on that timetable). While police generally turn a blind eye to foreigners cruising across the country on motorbikes, if you get into an accident, your insurance likely will not cover you if you were doing something illegal at the time.

If you're starting in Ho Chi Minh City, the backpacker area is the place to score a bike and find an agency that can help you expedite the process of getting a local driver's permit. The backpacker district is located in a quiet alley off Pham Ngu Lao street in District 1, and every taxi driver worth his cabbie hat should be able to get you there. In Hanoi find the same deal off Hang Be street, Cau Go Street, or Hang Bac Street.

For those of you who are less excited about the idea of just rocking up, buying a used bike, and waiting on a socialist bureaucracy for a permit, consider doing a guided motorcycle tour in a country like Guatemala.

If learning how to drive a motorcycle is something that has always been on your to-do list, but Netflix has always gotten in your way, then check out CA Tours in Guatemala and learn to clutch and throttle in arguably the most breathtaking landscapes in Central America.

After taking their training course, you can choose between one, two, three, seven, eight, 10, or 14 day adventures. Before my motorcycle (it wasn't a scooter Andrea!) was stolen by bandits, I used to spend many a Sunday cruising around Guatemala. Once I even convinced a woman to ride on the back (I promised we'd stop and get ice-cream).

While much of Southeast Asia could be called the Wild West by our standards, Cambodia has somehow won the draw and been given the title of Asia's Wild West.

Covering vast ranges of terrain, dotted in ancient temples, and home to the temple complex to end all temple complexes, Angkor Wat, the Kingdom of Cambodia welcomes you to explore. The Jungle Book is a true story, and you can find it in Cambodia.

While you still need to apply for a local driver's license in Cambodia, there is less of a wait than in Vietnam and the turnaround time can be as quick as 24 hours. When the cops pull you over expecting a bribe, you can flash them your legal right to drive and they will leave surprised and a bit depressed that the gringos have caught on.

You can buy a bike, but why would you? Bike rentals average $5 a day, and guided tours are also available on the spot in most touristy areas or in advance online.

I recommend starting your adventure in Kampot or Siam Reap where you can get the scoop of what route to take from expats and fellow travelers.

Something that might be intimidating to some would be motorcycle tourers, is the language barrier in all the destinations listed so far. While this adds to the adventure for some, to others it might be a dealbreaker. To which I have to say, have you thought about going on a motorcycle adventure in New Zealand?

New Zealand English, or Kiwinglish, is like chilled out Australian English — if that’s even possible. Watch some Monty Python before you go because their language is relentlessly tongue-in-cheek. And be thorough when asking for directions on your motorcycle — they abbreviate most locations into acronyms.

Most importantly, set your camera to breathtaking landscape mode — here glaciers cascade into volcanoes that float ash over placid lakes fed from mountain snowfalls that might leave the astute to comment, "Isn't this where Frodo ran from those dudes trying take his ring?" Peter Jackson chose wisely when he chose New Zealand as the home of his hobbits and in terms of motorcycle trips, New Zealand tops many a list. For more inspiration, or to check out prices and self guided and guided tours, check out South Pacific Motorcycle Tours.

It's the stuff of legend. It's motorcycling’s equivalent to Everest. The friends of mine who have done it recall their experiences in hushed war tones. They have that glimmer of detachment in their eyes that indicates their experience has led them to understandings that they simply cannot relate to someone who hasn't partaken. They turn the rest of us green horns into little jellyfish.

Ten thousand miles of roadway and at least four months off of work is what it takes to get you and your bike from Alaska's Prudhoe Bay in the Arctic Circle to Argentina's Tierra de Fuego in the South Atlantic.

Seeing North and South America like this is seeing how the puzzle pieces of the world fit together — how landscapes lead into each other and one culture and country gives way to another. People (legendary ones) do it all the time on their own, but it's also possible to join a tour group and embark on this epic adventure with a tour company like Moto Adventure Pros and have some guidance and camaraderie on your road to voyaging glory.