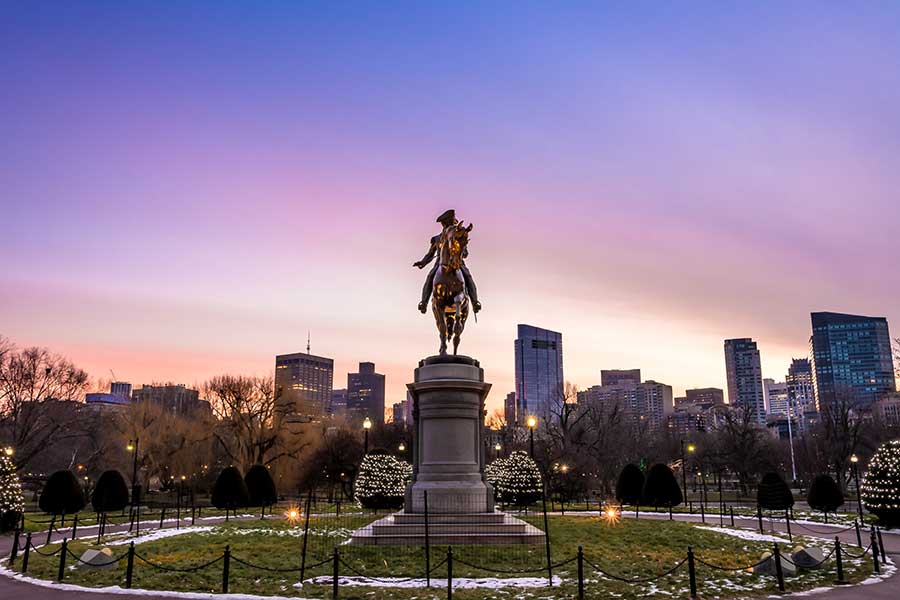 These 7 historic sites in the U.S. will give you your Hamilton fix while you embrace some of the richest moments of U.S. history.

Who doesn’t know Hamilton by now? If you somehow missed the (11-time) Tony-award winning rap concert-turned-musical theatre phenomenon, you will want to hop on the train ASAP. The musical retells the story of Alexander Hamilton, his fellow Founding Fathers, and how the U.S. fought its way to freedom. For someone who is both a musical theater and U.S. history fanatic like myself, this is the show to see, memorize, and do extensive research on while replaying the soundtrack over and over.

Because the musical is based on real historical events, it’s no surprise that fans of the show can actually plan a visit to many of the destinations mentioned or alluded to throughout the show’s 2 rap-filled acts. So, once you’ve memorized all the words and read up on the real events of the show, start planning a trip to these 7 historical locations to keep learning.

“She is buried in Trinity Church near you...”

Angela sings these words in the show’s final song, referencing the burial of her sister, Angelica, in the same location where Alexander Hamilton was buried. You can visit Trinity Church and its churchyard with the gravesites of both Angelica and Alexander on your next trip to NYC. Beyond just being his final resting place, Trinity Church was integral to Alexander’s life. He was involved in the church and attended King’s College, which was built on land provided by Trinity Church.

The battle that championed American independence took place in Yorktown, Virginia where American soldiers miraculously defeated a global superpower. The battlefield is now preserved by the National Park Service and visitors attend to experience it through museum exhibits, guided tours, and the Yorktown Victory Monument. You can even take in other historical sites by walking to the nearby historic village of Yorktown.

“Let’s have another round tonight.”

While there is no defining evidence in Hamilton that Fraunces Tavern is THE tavern we see Hamilton and his Founding Father friends toasting to freedom at, it is inferred that this was the place. The Tavern was a popular spot for many revolutionaries. Located at 54 Pearl Street in New York City, Fraunces has seen some of the most monumental debates, speeches, meetings, and lectures. George Washington, for one, bid his Continental Army farewell from the Tavern’s Long Room. Alexander Hamilton and Aaron Burr even attended a meeting at Fraunces just one week before their fatal duel.

“Whatever it is you do in Monticello...”

If you’ve studied up on Jefferson and Hamilton’s relationship, you know they weren’t each other’s biggest fans. The musical represents their inability to see eye-to-eye in a number of ways, but the Cabinet Battles may be the most memorable. Hamilton makes a few references to President Jefferson’s plantation residence in Charlottesville, Virginia. The plantation was home to Jefferson and the slaves that he has become notoriously controversial for putting to work at Monticello. Visitors of Monticello can embrace the history of the Declaration of Independence author and what he is most remembered for today.

The saddest part of both the musical and Alexander Hamilton’s real story is the fatal 1804 duel between him and Aaron Burr at Weehawken. Burr’s contempt for his frenemy becomes deadly when he shoots Hamilton in the show’s final moments, making him the story’s villain. History lovers and Hamilton fans can pay a visit to the famous Weehawken dueling grounds and Hamilton Park where plaques commemorate the Burr vs. Hamilton duel and others that took place in the same spot. Hamilton’s son, Phillip, also lost his life in a Weehawken duel.

“Thomas, that was a real nice declaration.”

The Declaration of Independence to be specific. While it is never directly referenced in the musical, Independence Hall is a can’t-miss for anyone who loves U.S. history. Lovingly referred to as the birthplace of America, this is the very location where both the Declaration of Independence and the Constitution were adopted. The Declaration was adopted within its walls on July 4, 1776; the Constitution followed in its signing on September 17, 1787. As an added bonus, visit Signer’s Hall to walk among the men who signed, authored, and contributed to our founding documents. Personally, Independence Hall is at the top of my “must see” bucket list!

“Why should a tiny island across the seas regulate the price of tea?”

There is more to see on Wall Street than you might think. The revolutionary idea (literally) that Britain should no longer demand “taxation without representation” was voiced at the Stamp Act Congress that took place inside Federal Hall, then New York City’s City Hall. The building saw several other momentous occasions, like the ratification of the Bill of Rights, the inauguration of President Washington, and the trial the resulted in freedom of press. The building standing on Wall Street today is not the original but stands in its place housing a museum dedicated to Washington and the many historical events that took place inside its original walls.

It’s obvious there is no shortage of places to get a closer look at the people and places that have built the U.S. since its revolutionary days. Whether or not you are a Hamilton fan, you are sure to enjoy sightseeing in some of the nation’s most famous locations that you’ve read about in school.

While you plan your dream U.S. history tour, don’t forget to plan for any surprise interruptions or emergencies. Our Get Away USA travel insurance coverage will keep you and your fellow historians protected from trip cancellations, trip interruptions, baggage losses, or unanticipated medical expenses. Designed for domestic travel, Get Away USA provides the right trip cost coverage for a history book-worthy tour of America.